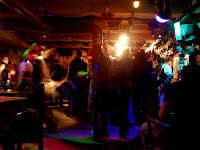 Opening Hours: 24/7
Category: Democratic, Bar
Feis Kontrol Rating: Non-existant for foreigners, otherwise Low - 1/5
Address: Kudrinskaya Pl. 1., (in the base of the Stalin building)
M: Barrikadnaya, Krasnopresnenskaya
Phone: +7 (495) 255-4144
Website: http://www.mccoy.ru/
The Real McCoy is a Moscow institution for expats and tourists alike. It is open 24/7, has virtually no face control, and usually has drunken girls topless on the bar by ~11pm Thu/Fri/Sat nights (and occasionally on other nights). There is no surer place to find a willing girl for the evening (of questionable virtue and aesthetics, but then probably so are you if you're there looking for her), except perhaps Boar House or Hungry Duck, and McCoy's has the benefit of a "no hookers" policy, so no matter how ludicrous the proposition you receive, it's probably not (directly) financially motivated. 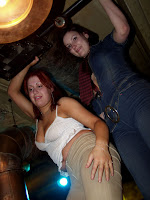 Another great benefit of this bar is it has the largest and strongest Long Island Iced Tea's in Moscow for less than $10, which are a sure-fire way to start (or end) the evening.
McCoy's is located in the base of the Kudrinskaya Stalin Dom (one of the Seven Sisters), which makes it a unique place to visit, and is across the road from the Barrikadnaya Metro station (which may be one of the reasons so many of the podmoskovia girls who frequent it come from the NW of the city). Once through the narrow entrance, you find yourself with a coat check and the infamous unisex bathrooms on the left, and the main room to your right. The bar is on the left side of the room, with the dancefloor on the right, some tables and chairs towards the back, and a little-noticed door at the far end of the room leading back to another quieter room with more tables and booths. There is a sole window looking out at the world next to the dancefloor, through which passers-by can take note of the insanity inside, and routinely be flashed from girls inside the bar. 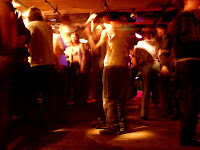 McCoy's maintains a faux-speakeasy decor, with hard wooden floors and rough-hewn tables with sturdy chairs (they would have to be, considering the abuse they get). There are advertisements from prohibition adorning the walls, and the bathrooms are papered with quaint advertisements from publications of the period.
McCoy's has surprisingly good food at reasonable prices. A mix of American staples and Tex-Mex, with some Euro favourites provides a hearty meal before some serious partying, and the low prices attract a diverse crowd of poor expats and ravenous studentki.
As a fan of Moscow Russkie-Pop and house music, one of my great letdowns about McCoy's is the music. Endless repetitions of tired old wedding music (think "Come on Eileen") grates on the ears and no number of Long Island's will drown it out. 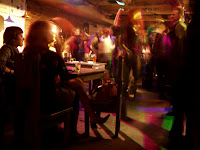 Despite my earlier comment regarding the old & unattractive women who frequent McCoy's, there are a smattering of attractive students and even intelligent professional girls who, dissillusioned with Russian men or just up for a good time come there to meet foreigners, and they have far less of the attitude and pretensions of the girls at the pafosny clubs.
In my opinion, the most objectionable element of McCoy's is the profusion of sweaty, drunk, horny middle-aged male expats and tourists, which make quiet enjoyment of one's drink and amusement at the never-ending entertainment a logistical challenge for even the hardiest club-goer.
In short McCoy's is not everyone's cup of tea, but is certainly a diversion from the club scene and for someone looking for cheap drinks, a good time, friendly atmosphere, plenty of foreigners and available (generally) English-speaking girls, it's a fine place.
Posted by Max at 16:39