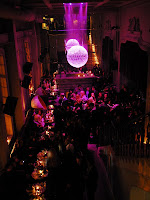 Wow.
For the last few weeks, Moscow has been getting a glimpse of what's to come once Soho Rooms officially opens for New Years Eve. This extraordinary venue already offers a spectacular ground floor bar, a beautifully appointed second-story restaurant, a spacious third-floor lounge, and a discreet cocktail bar. The nightclub finishes construction and opens this weekend, and in Summer Soho Rooms will open a spacious Pool Terrace, offering gorgeous views across the River and towards the White House, and no less than two swimming pools. All of this is housed in a purpose constructed location on the foundations of an old silk factory.

It is evident from the attention to detail and high-class finishes that the (undisclosed) budget to open Soho Rooms was considerable. From the liberal useage of marble, an onyx bar, the exquisite paintwork and luxurious furnishings, the owners have sought to position Soho Rooms as a very high-end venue.
Soho Rooms is the brainchild of Dmitriy Braude, longtime owner of Garage, and veteran of the Moscow nightlife scene. He is joined by two financing partners and D’lux Promo (Opera, Shambala), and the team have definitive views on the type of place they want Soho Rooms to be. Not content to open yet another nightclub, or even nightclub/restaurant, they seek to create a new type of Moscow experience, a venue that can cater to the various tastes of Moscow's high-end crowd, whether they seek to relax on a summer deck or in the lounge, have a delicious meal (they have imported a chef from the US White House and Asian chefs for their fusion), or party till dawn.

This product and service offering is designed to fill the notorious "dead space" of a Moscow evening, the early evening (pre-dinner ~6-9) and the post-dinner/pre-pre-party time (post dinner ~11-1). It's an ambitious plan, and if they pull it off, they really will do a service to Moscow and make this place an obligatory stop on the Moscow circuit.

From the entrance and requisite feis kontrol on Savvinskaya Nab., adjacent entrances for the restaurant/lounge and club funnel people into the appropriate coat checks and interior. Heading left into the bar/lounge, a two-story open room lined with floor-to-ceiling windows (containing gogo dancers on the sills) and lounge tables on the left is framed by a opulent staircase descending on your right. At the base of the staircase, a bar and some standing space for people to congregate is surrounded by more tables and the DJ booth (yet to see if DJ booth/style and gogo dancers will be there after the club opens). Hanging overhead is a beautiful optical glass/light fixture. In a small anteroom to the right of the base of the stairs a small banquette allows people a respite from the hubbub.

Proceeding up the stairs, the second floor restaurant is spacious and modern, with warm hues from the golden onyx bar and African hardwood panelled roof. I have not had a chance to dine here yet but what I saw looked good (almost as good as the girls dining there).
Proceeding up another narrow staircase to the left brings you to the third floor and a quieter lounge-type environment, more befitting to a chat with friends or a quiet cigar. The sumptuous yet simple furnishings complement the artificially aged tapestry-like walls. The lounge looks out onto what will be the Pool Terrace in Summer (with yet another separate entrance), and itself has a nice view up the Moscow River.
Back at the entrance, proceding straight ahead, you pass the main bathrooms (a manager stressed that the clubs design focused on ensuring sufficient bathroom and coatcheck space), which are inventive for the women's bathrooms being located on a mezzanine above the men's, ensuring both a good view for the men looking up and the women looking down as they survey the scene.
The club itself is a typical two-story rectangular design, with large open dancefloor surrounded by an upper floor balcony, enclosures for gogo dancers, a retractable stage, and large bars on both sides of the dancefloor. As the club was still under construction last weekend, I can't comment much on the design. The unique feature of the club is the spiral staircase leading up into the roof, leading to another swimming pool, as well as bathrooms and changing rooms, for those who would like to swim during their nightclubbing (and who doesn't?). The club is well-sized too, designed to be much smaller than the megaclubs (slightly smaller than Most), to ensure quality feis kontrol.
It's far too preliminary to be able to adequately review the establishment and its prospects but first impressions are extremely positive. The crowd was a stunning mix of mostly friends-of-friends of the owners, but everyone seemed to be having a great time. The DJ spun some original and refreshing mixes and the drinks were more reasonably priced (but only just) than Most or Rai (and thankfully they have Red Bull!).
Potential pitfalls for the venue include it trying to go too far to satisfy too many areas of Moscow's tastes, because above all, Moscow is fickle and things get old quickly, so the execution of all aspects will need to be exceptional. It's a very big venue, and especially once other areas open in summer, maintaining feis kontrol will be tough, else it will experience the same quality deterioration as Rai, now too-often populated by 15-year-olds or male patrons who bear closer resemblence to simians than clubbers. In some areas of the bar, it was already a little difficult to move past people, even with the limited crowds of the last couple of weekends.
I look forward to visiting again once the nightclub (Disco Room) has opened, to try the restaurant, and see how the establishment settles in, but overall, this is the best new concept and new venue I have seen in a long time (and I've been impressed with Most (but not most)).
Problems with feis kontrol? There's always 1171 down the road.
-------------------------------------
Update: Jan 2008
I had the chance to dine at Soho Rooms recently, and I was shocked. The food was adventurous, well-presented, and absolutely delicious. This website does not typically review restaurants, but our meal was too good to pass unnoted. Chef Tim Freeman (imported from Texas of all places) has concocted an elaborate (too adventurous for most local diners, I fear- would recommend adding some "safe" items) menu which combines mostly foreign flavours into true fusion cooking, the likes of which I haven't often experienced in my time in Moscow.
If you have have the interest and time (it takes a while), permit Tim and his sous-chef (from the Phillipines) to take the lead and provide you with the dishes they feel like preparing- I can guarantee you some delicious surprises, like special sorbet prepared at the table using liquid nitrogen, or Szechuan buttons that numb your mouth. I can't remember the last time my taste buds were truly engaged by a Moscow meal.
The restaurant is a little dim, and it's not a cheap meal, but if there are more delights to come from that kitchen like I experienced on my first visit, I'll certainly be a regular at the Soho Rooms restaurant.
So... Thumbs up for the bar & the restaurant- looking forward to the nightclub!
(FYI- please note that I am not being compensated in any way by Soho Rooms, it's just been a long while since I was this excited by a new venue in Moscow!)
-------------------------------------
Update: Feb 2008

The club is accessible through a separate entrance, although so far the club and bar are intermingled (a bad thing in my opinion if you read below). Through the main doors, a lower level to your right houses the men's bathroom,

while a mezzanine directly above is the women's, complete with Juliette-style balcony for the ladies to watch the world go by. Past a large mirror (in Moscow- what else?) and the coat check is a discreet cocktail lounge, perfect for a slightly more intimate discussion with someone you've met in the club- a nice detail many clubs fail to offer.

It's a little too early to pass judgement on Feis Kontrol, but aside from the timing and flow issues (again, mentioned below), the crowd so far on the nights I've been there has been high quality, with plenty of gorgeous girls attracted from some corner of heaven who aren't regulars on the Moscow club scene. Natalia Vodianova, Lucy Liu, and Marat Safin were all in attendance this last weekend (although not together- an interesting mental picture).

The club itself is beautifully done, as with the rest of Soho Rooms no expense has been spared on design or decor. Once through the entrance corridor (a cleverly mirror-lined passage which refracts lasers in every direction), the club itself opens in front of you. The first impression for those used to Opera, Dyaglilev, etc, is that it's really small.

The simple rectangular layout of the space with a two-tier design (VIP tables upstairs and at the back of the main room), bars on both sides of the main floor, and part of the floor taken up by a (retractable) stage and a dancer podium makes the capacity about half that of Most, at a guess. This is not necessarily a bad thing, as the overall large size of Soho Rooms as a whole and management's stated desire to keep tight feis kontrol means the club is appropriately sized for it's intention to be an exclusive party venue.

Most surfaces of the club are done in sparkling black, and the comparatively restrained design, furniture, and lighting bear more than a passing resemblance to Most, but without the basement exposed-brick feel. The most extravagant gimmick is the (as-yet unused) spiral staircase to provide access to the roof terrace and pool in summer. Combined with a kick-ass lighting system, the decor, dancers and layout works, especially with the thoughtfull addition of enough bar space that's it's straightforward to get a drink from the friendly bar staff. 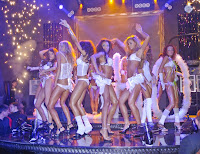 The DJ line-up I've seen so far has been a mix of the regular top Moscow DJ's, with an occasional rotation by some lesser-known and slightly more progressive names. The three nights I've been there, they have persisted with the peculiar Moscow tradition of having some one-hit wonder group (usually imported) interrupt an otherwise great DJ set to croon their song, and then let the crowd down by attempting something else quasi-creative while the Russian-only speaking crowd shuffles uncomfortably. Thankfully (unlike Rai), they have at least had current one-hit wonders! Maybe this type of show will only be for the duration of opening parties, but admittedly the space is perfectly sized for some intimate and proper concerts on non-weekend nights with real stars, should they wish to pursue this route.

The club's only failing so far is that it's still finding it's soul. While it's a great space with great music, crowd and dancers, it took till well after 2am on Fri/Sat to really feel like a party. In my opinion, this is partially due to the challenge it faces being attached to a popular dinner and pre-party space. Rather than other nightclubs who have a crowd waiting outside from shortly after opening so they can quickly fill the space, patrons (unusually for Moscow- overwhelmingly male) dribble in from 11pm onwards out of the bar and restaurant, giving the space a half-full, guys-only feel well into the evening. Hopefully this will be sorted soon, and the Disco Room will be a complementary addition to the excellent Soho Rooms venture.
Posted by Max at 15:33

Indore is always famous for nightlife. Visit at calypso club with your friends and enjoy with Dj, exotic food, lip-smacking desserts and gastronomic drinks.
Best Disco club in Indore