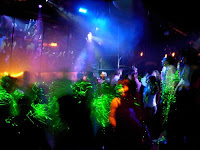 Another Moscow nightlife institution, Karma Bar has been packing in the crowds for more years than there have been Leto/Osen/Zima reincarnations. A peculiar mix of oriental design, Latin dancing, and just a hint of mystery has kept this popular club packed for years.

Unlike nearby Propaganda, Karma bpth harder to find and slightly less publicised for tourists and in guidebooks, so there are fewer foreigners here. The crowd tends to be a fun-loving mix of students and younger people who prefer to party without the hassles of Feis Kontrol and attitude of the Moscow tusovka (high-end party scene). This crew will party hard and late though, and I’ve seen cocaine served over the bar here to help this party keep raging.

To find Karma, the address will land you at a gate, where (very mild) Feis Kontrol awaits and an entrance fee will be extracted. You then wind your way down a long alley until the sound of music reaches your ears. You enter a covered stretch of alley, where tables line the walls, and to your surprise (on Saturday, at least), Tango and Salsa lessons are being given next to a small bar!

Fear not, for the nightclub lies deeper. Proceed through a small entrance at the back of the room (beware the coat-check rigmarole if it’s winter), and descend a series of landings with strange Buddhist decorations (the bar was originally called “Buddha Bar”), until you reach a strange room with a mirror wall and set of stairs up half the wall. This is the bathrooms, but if you proceed further, you enter the main bar, a dark cavern with comfortable couches and a long bar, often with girls dancing on it.

Two rooms lead from the main bar, one to a small room of divans for private tables, and the other to a long dancefloor with a stage, and another bar at the far end. The crowd here dances to mix of unadventurous Russkie Pop, but it’s a fun and very friendly atmosphere. 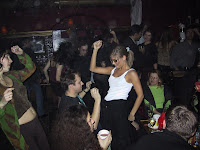 The decor is dark and heavy, with lots of curtains, pillars, and heavy on eastern symbolism (ignore the huge Buddha in the middle of the room). While there are some lighting effects, the club doesn’t boast the type of laser displays typified by the high-end clubs. Lithe go-go dancers amplify the club atmosphere.

As well as being a popular Fri/Sat night venue, Karma also has a happening party on Sunday nights, which can be a difficult night to find Moscow action.

Overall, Karma is a fun place to party, more of a Russian scene than somewhere like McCoy’s, but still plenty of friendly (often English-speaking) locals to whom foreigners are an attractive novelty. Minimal attitude, cheap prices, and fun crowd make it a great place to spend a non-Feis Kontrolled evening.
Posted by Max at 20:40