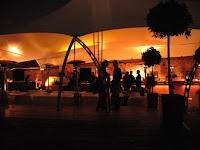 Krysha Mira, a stunning rooftop nightclub next to the Moscow River, is Moscow's top club of the moment. It's penchant for secrecy and passcodes, its ultra-tight feis kontrol, and it's inconvenient location have people breathlessly talking about the "legend" of Krysha. In reality, it's a fantastic club with excellent music, great design, a beautiful crowd of interesting people, reasonably priced drinks, and THE place to be for sunrise and beyond on a weekend, but for all that- it is just a nightclub.

To find Krysha, drive along the Tarasa Shevchenko Nab. , passing the Hotel Ukraine on your left. About 500m further on, you'll see some cars parked, and a guy with a clipboard standing at the base of some decrepit metal stairs.

Once through Feis Kontrol, at the top of the stairs is a deserted yard. You must cross the yard, climb more stairs, pass through an unmarked steel door, and climb another unfinished concrete staircase before you even begin to see any indication that you're in a happening nightspot. Is that a coatcheck or some other cruel illusion? Once you eventually reach the second floor the fun begins.

The lower floor of Krysha contains a dimly-lit bar surrounded by lounges, and another corridor leading to an outstanding ruby-lit chillout room with big white divans. The upper floor is where the action is, an airy open space covered by a tented roof and glass walls. The open-air deck is huge, and in summer hosts couches, cabanas, and plenty of places to recline and relax. If relaxing is not your style, excellent DJ's on both floors play a creative mix of house and electronica, with none of the standard Russky-pop or top-40 mixes played at Moscow's Mega-clubs.

Krysha strives to host a more eclectic crowd than other Moscow venues, and to have a slightly "artsy" bent. In practice, this means the usual mix of tall models, Moscow party people, and outsiders who've reserved tables, but also that the crowd tends to be a little older and better dressed than clubs like Opera, and there are more of Moscow's version of an "alternative" crew. In any case, Krysha draws the biggest celebrities, the hottest models, and the who's who of the Moscow nightlife scene, so the people-watching is exceptional.

The bar staff are knowledgable, friendly, and efficient. The drink prices are more reasonable than many clubs, although the cocktail selection (particularly upstairs) is limited. 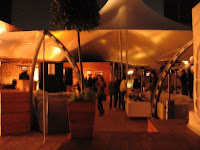 An evening at Krysha tends to flow in several waves, as the pre-2am lounge scene morphs into a wild club scene around 2-4am, then a slight lull until the real afterparty gets going by 5am (the busiest times at the door are around 4-6am), and the roof is packed with a rocking DJ until well after 10am. The highlight of a night at Krysha is witnessing the sunrise from the roof deck, lounging in a cabana, champagne in hand, watching the first rays of the sun hit the Moscow City towers across the river. The glow of the morning, the bizarre juxtaposition of the river views, the new shining towers, and the dilapidated factory all around you, while shiny happy people rock to the beat of a new day is a defining Moscow experience.

A lot has been said about Krysha's Feis Kontrol, and while it is probably the toughest in the city, it's consistently and fairly applied (at least compared to some places). Krysha has a strict system of entry. A passcode is sent to their list every night, and anyone with the passcode who is on the list is generally admitted. If you're not on this list, have no influential friends already inside, and you're not Krysha's target market, you're likely to be out of luck. Unfortunately, one of my major gripes about this club is that they maintain such strict feis kontrol that the club (especially downstairs) is often left half-empty, while scores of people are turned away.

Apart from that, what's not to like about Krysha? My only other gripe is that the reputation of the club and the uber-strict feis kontrol gives some clubgoers an aura of entitlement, meaning the crowd at Krysha isn't as friendly as some other venues.

Ultimately, Krysha is a fantastic venue and an excellent night out. It provides a welcome alternative to Moscow's Megaclubs, and is the summer nightclub of choice.

Anonymous said...
This comment has been removed by a blog administrator.
2 February 2009 at 05:28

Indore is always famous for nightlife. Visit at calypso club with your friends and enjoy with Dj, exotic food, lip-smacking desserts and gastronomic drinks.