In the next couple of months, Moscow is poised to be deluged with the openings of at least FOUR new high-end nightclubs, which should seriously upset the status quo.

Following the flaming demise of Diaghilev, bereft clubgoers have fanned out to other Moscow hotspots, hoovered up by the new Soho Rooms "Disco Room", returned to Rai or Opera, and some have even foolishly hoped to kick start the summer season early at Krysha. The selection of venues will soon be confused even further, and running into that girl you hooked up with last week "Groundhog Day"-style will soon become (thankfully or not) much less common.

First & foremost, the opening for Dyagilev's replacement has been brought forward to April or earlier, rumoured to be huge and located near Rai. A newcomer by the name of New Millennium is skulking near Galereya, but the venues the tusovka is talking about in hushed tones are the twin venues to be opened by the long-dormant First proprietors, a
Posted by Max at 02:58 No comments: 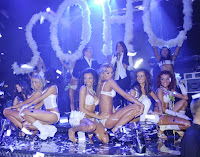 See what MoscowMAXIMUM thought of the new space, located at the bottom of the Soho Rooms (Сохо Румс) review.
Posted by Max at 21:14 No comments:

At 11.30 this morning, Moscow fire crews responded to reports of a fire in the Sad Hermitage, the gardens that house Moscow Megaclub Dyagilev.

The Level 3 (very serious) fire has reportedly damaged or destroyed over 1,500 sq. m of space throughout all five stories of Dyagilev's building. One person was reported injured and four were rescued from the basement.

The fire broke out two and a half hours before the Chinese embassy in Moscow was scheduled to celebrate Chinese New Year in the nightclub.
Dyagilev's destruction in today's fire will likely spell an early end for the club which was scheduled to host its closing party on April 26.
For the Russian readers amongst you, this entertaining ode to Dyagilev was circulating within hours of the fire (author unknown):
Стриптизерш и барменов одежды,
Баксы, евро, сколько-то рублей,
И, конечно, девичьи надежды,
И, конечно, похоть кобелей.